All the young characters are played by students from Mith Samlanh. Davy Chou made this choice because teaching in Mith Samlanh reveals him how creative those street youth was. They love to sing and perform and many of them dream of becoming actors, but there is nearly no chance that this dream comes true. The collective film would be a great opportunity to give them this chance. We organized a one-week casting in Mith Samlanh from May the 4th to May the 11th. 70 students registered in three days. This experience was wonderful because it was the first time that film workshop students worked together. Everyday some groups composed by students from different schools (sometimes DMC students with Reyum students, sometimes Mith Samlanh students with Lycée Descartes students, etc.) auditioned candidates for the main characters of the film. After this audition the students debate on the quality of the performances they saw. This teamwork was successful, as all the students work together despite their differences of background, social level or even native language. They had autonomy as large as possible: beginners were auditioning beginners and everybody was learning by practicing together.
The students chose two girls of the beauty class to perform the sisters, and one boy of the hair cut class to perform Seila. We really think they are talented and hope that the film will show that to all.

The Twindiamonds, sequence by sequence:

Seq 1: Lyda, a university student, lost a very important thing, which we don’t know exactly what it is. Nobody knows where is the thing, but the cleaner saw a man with a dog.

Seq 2: At night, two strange people exchange a dog in a deserted and frightening land.

Seq 3: The day after, the cleaner recognizes the dog, in front of the school and bring it in the school. They decide to follow the dog.

Seq 4: Wotha, the volunteer, follows the dog and discovers a group of young gangsters in an old abandoned building. Hidden, Wotha hears that the gangsters killed Lydas’ father. Trying to escape, Wotha falls on the floor and makes some noise. The gangsters discover him and shoot at him.

Seq 5: Seila, another student, was walking in the streets when he heard the bang of a gun. He finds his friend Wotha dead and takes his phone. Seila meets Lyda in the streets and tells her everything.

Seq 6: They look at a video Wotha took with his phone while listening the gangsters, but then they see among the group a girl with exactly the same necklace then Lyda. Seila, confused, gets scared and escapes from Lyda. But suddenly someone hit him in the face and he knocks out. When Seila wakes up, he sees the girl of the video, with the same necklace, speaking with Lyda. 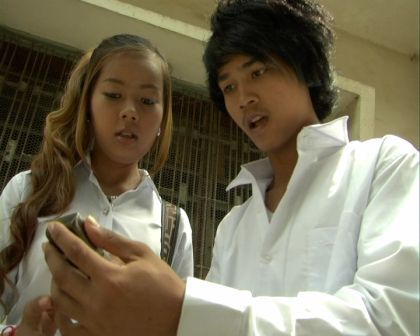 Seq 7: The other girl, named Lina, explains to Lyda that she belongs to the gangsters group, but that when they wanted to kill Lyda’s dad, then the dad saw Lina’s necklace and explained her that she was his daughter. Lina believed him, but couldn’t succeed in saving her dad from the gangsters. The two sisters, crying, turn to reconciliation. 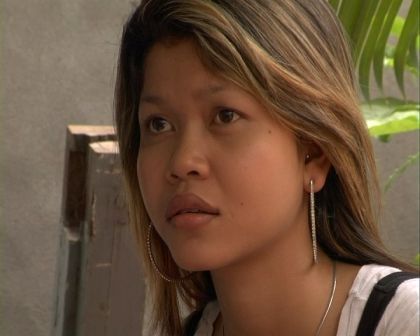 Seq 8: In Lyda’s house, Lyda’s nanny explains the two girls that she knew their mother: when they were babies she asked her to take care of them, and also gave her the two necklaces. But the nanny doesn’t want to say more and asks the two girls to go out of the house for a moment.

Seq 9: While walking in the streets the two girls help a woman who has felt on the floor. Staring at their necklaces, the woman seems to be very surprised and ask Lyda and Lina to have some tea with her in order to thank them.

Seq 10: In the restaurant they understand that the woman is the girls’ mother. 20 years ago their dad was the mafia leader, and that she left him because he didn’t want to stop. Indeed she asked the nanny to take care of her two daughters. But she doesn’t know why Lina was separated from her dad and why for Lyda her dad has never dealt with gangsters. But a moment later the nanny explains everything: when the mother left her husband, he decides to leave the mafia and to find her back. But he didn’t and one day, someone stole Lina when she was still a baby.

Seq 11: Coming back to Lyda’s house, one gangster waits for them inside! But he’s Lina’s boyfriend, Sovannara, who came to tell them that the gangsters caught Seila during their absence. He also reveals that the reason why the gangsters killed Lyda and Lina’s dad is that 20 years ago he stole them two diamonds. They will exchange Seila against the diamonds. Then the mother reveals that before leaving she stole the diamonds from her husband and hided them in the two necklaces she gave her daughters. Sovannara decide to go to find Seila.

Seq 12: But suddenly someone knocks at the door: the father gets in the house! He didn’t die and someone helped him to get better in the countryside. After thinking, they understand that the necklaces were the reason why they were all separated for so long time, but that the necklaces were also the reason why they all find back themselves. The rebuilt family is more important than some diamonds: they decide to give the gangsters the diamonds and ask them to stop purchasing them.
The father and Sovannara meet the gangsters and take Seila back. Sovannara asks the mafia leader not to kill the father, in name of his love for Lina. The boss agrees if Sovannara, his old friend, commits suicide. Sovannara agrees to do it. He takes a gun and pushes it on. But no bullet inside: the mafia leader wanted to test Sovannara. He maybe understands that he would never have Sovannara’s chance and let them go.
After 20 years, all the family is now together and stops facing problems.

Davy Chou is a young French filmmaker and producer, whose parents were born in Cambodia. Between 2001 and 2004 he managed a film and video workshop for high school students. In 2005 he founded CQN Productions, which produced 9 short films. Davy Chou produced three of them himself. He also launched an international digital film festival the same year, Festival des Nouveaux Cinémas (www.nouveaucine.com), the fifth anniversary of which was just recently celebrated. He has worked from January 2007 to December 2008 at Studio 37, Orange France Telecom’s branch for movie production.

In 2008, the short film Girls of fire, on which he was production manager, was selected at the International Critics’ Week at the Cannes Film Festival.

He has developed in Phnom Penh a filmmaking workshop and he is preparing an exhibition and a documentary film about the golden era of Cambodian films in the 60s and the 70s, as his grandfather, Van Chann, was one of the greatest producers in that time in Cambodia.

« The Twin Diamonds » is the first film totally written, shot and edited by 60 Cambodian students from more than 6 schools in 2009 at Phnom Penh – Mith Samlanh, the Department of Media and Communication (DMC) of the Royal University of Phnom Penh, Reyum Art School, Lycée Français René Descartes, the Royal University of Fine Arts, and Limkokwing University. « The Twin Diamonds » will be shown two times with free entrance fee for public: on Saturday, September 26th 2009 at 5 pm, French Cultural Center; and Saturday, October 3rd 2009 at 6pm, Lux Theatre.

The film is the result of an 8-month-filmmaking workshop created by Davy Chou, a young French filmmaker whose grandfather Van Chann was one of the greatest film producers in Cambodia in the 1960s.

Davy Chou’s main idea with this workshop is to help bring the come-back of this golden age for film industry in Cambodia.

Sen Tharo, a student from Limkokwing University, said, “Through the film, I could practice what I learned in class. First, I felt nervous when holding a camera. However, after repeatedly practicing, I think I can do it well.”

Ith Sothoeuth, a DMC student: « I have learnt a lot from this workshop. Previously, I knew nothing about movie-making. Now I know what is ‘jump cut’, ‘flash back’, ‘tracking’ and some techniques that film directors use to correct the mistakes. It is a group work. It is not to do with only the film director, actor and actress, or camera man, but it is something to do with everyone. »

« If one of these people makes a mistake, all of them will face problems. I watched movies just for fun before, but now I watch movies with critical eyes. I try to find the mistakes in the movie,” he added.

« The Twin Diamonds », whose main young actors come from Mith Samlanh, is a 45-minute-film about the story of two twin sisters, who never met before and who struggle to investigate their mysterious past. The film, written step by step by 14 different student groups, is full of surprises and narrative twists.

Mr. Sebastien Marot, founder of Friends International: “This is very exciting initiative not only participates to the rebirth of Cambodian cinema, but also shows that art and films in particular can bridge social and cultural differences. This movie shows how together all these young people have found one voice and have enriched each other with new and different ideas. Because of the way it is designed, this movie carries a strong message of cooperation, friendship and understanding for all young people living in Cambodia.”